Natural disturbances in the boreal forest typically leave evenly-distributed green and dead trees and/or clumped patches of trees within any given stand of forest. The harvesting design at EMEND incorporates both types of residual tree patterns within each harvested block. The innovative harvesting treatments were applied to all 10 ha stands in a standardized manner that can be implemented operationally. All harvesting treatments were conducted during the winter of 1998.

A modified uniform shelterwood pattern was employed using conventional harvesting equipment (feller-buncher and wheeled skidder) to obtain distributed retention patterns. All operations (felling and skidding) were completed in 5-m wide machine corridors spaced 20 m (center to center) apart, leaving a 15-m wide retention strip between each corridor (figure 1). Specified retention levels of 10%, 20% and 50% were achieved by systematic tree removal from the retention strips (table 1). All strips were orientated in a north/south direction, perpendicular to the prevailing wind direction so as to minimize wind-throw and eliminate eliminate response variation due to random machine corridor orientation. Since the machine corridors account for 25% of the compartment area, the 75% retention treatment included machine corridors only. All 2% retention (clearcut) treatments were harvested in the conventional clearcutting manner with no designated machine corridors.

Two large patches of trees (ellipses) were left unharvested in each block to simulated clumped retention patterns typically found following wildfires. The patches are 0.2ha and 0.46ha in size.

For further details on the harvesting operations and prescriptions please read The Final EMEND Harvest Layout and Extraction Plan by Sidders and Luchkow (1998 non-published report). 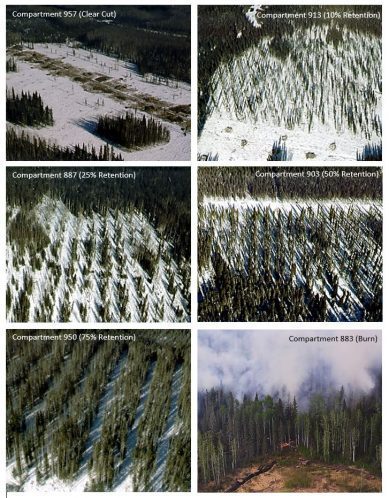 One of the primary objectives of EMEND is to compare the response of ecosystem processes and biodiversity in variable retention harvested stands to stands that have originated through natural disturbances such as fire. Therefore, prescribed fire has been implemented on the EMEND landscape using two methods: 1) full stand burns where a 10 hectare unharvested stand is burnt and 2) slash burns where a 10 hectare stand is harvested to 10% green-tree retention prior to burning and all residual slash is then burnt. All burn prescriptions were developed by the Canadian Forest Service (CFS) Fire Research Group and the prescribed fires were conducted by Alberta Sustainable Resource Development (ASRD) Forest Protection Division.

Pre-assessment: Transect survey for Dead and Downed Woody Debris and placement of Depth of Burn pins is done prior to the burns.

These codes are all part of the Canadian Forest Fire Danger Rating System.

Prerequisite Weather and Fire Indices: The actual indices and codes that exist on the day of burning are used to predict fire behavior and effects. These codes are used as indices to assess when to burn but the final decision is made by the "on-site" ALFS ignition team.

Ignition: Ignition and control of burns is conducted by ASRD. All burns to date have been ignited by ASRD using an aerial ignition methods or hand-held drip torches. 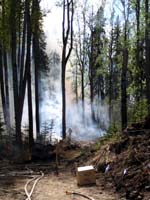 Fire Control: Fire guards that are bladed to mineral soil have been cleared around the sites to be burned and adequate ground and air resources are present and available "on-site" during and following ignition.

1) Conifer dominated compartment 926 was burnt in early August 1999 and was the first experimental burn attempted at the EMEND site. The fire burned hot and with a medium rate of spread. The burn was patchy with some areas burnt to mineral soil and other areas with no evidence of burn. 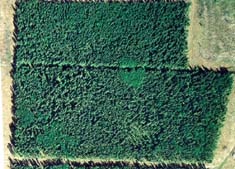 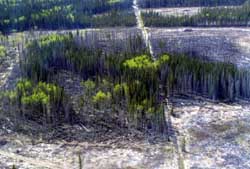 2) Deciduous dominated compartment 943 was burnt in April 2000. The burn was typical of an aspen dominated stand with low fire intensity and rate of spread.

3) Mixed compartment 937 was burnt in July 2004. Fire intensity was moderate for first 20 minutes of the burn and along the east and northeast sides of the compartment. The remainder of the compartment (80%) burnt at a low intensity. The fire smouldered for about three weeks leaving a patchy distribution of exposed mineral soil and intact forest floor.

4) Mixed compartment 883 and conifer compartment 891 were burnt in May 2006. Both burns were of moderate intensity but patchy.

Immediately following the harvesting operations, a half-hectare (100m x 50m) silviculture experiment plot was established in each compartment harvested to leave 2%, 50% and 75% residuals in the deciduous-dominated and conifer-dominated cover-types.

Four site-preparation treatments were applied in each plot:

One-half of each resulting quadrant was planted in July 1999 with 415B White Spruce seedlings at a density of 800/ha (i.e., 100 plants/quadrant). The other half of each quadrant was seeded with local white spruce seed. Growth of these seedlings has been monitored yearly and the cost and results of more intensive silvicultural are being compared with the natural regeneration that characterizes the remainder of each compartment.

See Silviculture Research for details on the silviculture treatments and associated research projects.